SALT and SUGAR/SALT or SUGAR? 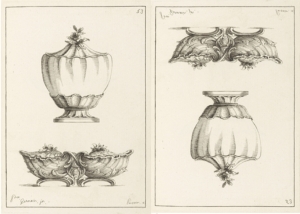 Generally viewed as the ultimate dietary malefactors in contemporary Western cultures, salt and sugar have adopted –singularly, in tandem, or in contrast to one another–many meanings and held many functions in a long historical period, both in France and in lands impacted by French colonialism.

The October 29-30 Conference to be held at The Graduate Center of CUNY, seeks to bring together scholars who are currently working on any aspect of SALT alone or in relation or contrast to SUGAR in French cuisine, gastronomy, food culture, economics, political and social history, and in the arts.

Rather than the traditional “conference paper,” we encourage fifteen-minute presentations of ongoing work, especially those including digital components, although full papers are also welcome as long as they fit the time limit. The Conference is open to any time period, from medieval and early modern to the contemporary world, but has a strong medieval and early modern component.

The Henri Peyre French Institute is holding an ongoing seminar over several years on the theme of Food, Power, Exchange and Identity: Food and Foodstuffs in the French and Francophone Worlds: please visit the HPFI website for details on past and current projects, including our online Forums.

The seminar seeks to provide a space, both virtual and on site, to present work, test hypotheses, and exchange conclusions with other scholars interested in examining the place of foodstuffs in French and Francophonie cultures within a distinctly interdisciplinary framework.

The Conference will bring together literary scholars and social historians with art historians, anthropologists, sociologists, specialists of political economy, and researchers working at the confluence of the sciences and the humanities.

The Conference will also honor the groundbreaking work of the late Claude Gaignebet (1938-2012), a distinguished French ethnologist, on the symbolic and ritual meanings of salt in early modern and folk culture.

Culinary uses of salt have impacted the way French food developed into its own particular style between the sixteenth and nineteenth centuries. Its presence and dosage in food and food cultures are also of considerable importance in the Caribbean and other areas of the “Francophone” reach. Salt’s early functions range from medical applications to its indispensable role in the preservation of meat and fish. Satirical themes in literature evoked the combination of heavy drinking with consumption of salty foods, and, well before Reformation attacks on the theology of Lent, took aim at the wretched foods imposed by the Lenten diet. The development and exploitation of salt marshes in several regions of France had a profound impact on local economies and cultures: Protestant investment in such enterprises in early modern Western France adds an intriguing dimension to the social history of religious strife in the 16th and 17th centuries. The French monarchy’s much reviled tax on salt was a significant factor in early modern unrest up to the Revolution. Salts of different origins also were present in early industrial applications and the development of distinctive methods to process salt has local economic and cultural implications. Salt was precious enough to warrant containment in special and valuable vessels. Salt’s symbolic implications have informed hermetic doctrines, literature and art in myriad ways into the modern period…Salt is ubiquitous, familiar, ordinary, complex and mysterious…

The Conference proposes to open up the consideration of the multiple meanings and functions of salt in relation to its frequent apposite, and sometimes companion, sugar. A later conference, to be announced, will be dedicated specifically to the history and representation of sugar production, plantation economies, slavery and resistance in the Francophone orbit.

Themes and topics might include, but are by no means not limited to:

The symbolic uses of salt and/or sugar in art or literature.

Salt and/or Sugar in regional or Francophone cuisines.

The culinary and/or symbolic function of salt and/or sugar in the preserving of foods.

Salt and/or sugar in material culture; objects that preserve and/or present them

Salt production and processing and immigration.

Industrial applications of salt and different types of salts in early industry, such as the dying of textiles.

Salt in rituals such as exorcism, funerary rites, protection against zombification….

Theoretical and philosophical reflections on salt and/or sugar

Imagery and discourses on the excess of saltiness in the food regimen of Lent.

Representations of the relation of salt and wine, especially in late medieval and early modern texts.

Salt, Sugar, culinary registers, and the health regimen and in early medicine.

Salt in alchemical treatises and practices. .

Saltmarshes and salt works in local economies, especially in the early modern period, and especially in the Western regions of France and in the Aigues-Mortes area. The role of Protestants in operating such salt production centers.

The hated gabelle or salt tax. Local conflicts over the control and trade of salt….

Please send a brief description of your ongoing work or paper proposal, accompanied by a current CV to the Henri Peyre French institute by JULY 31.

Responses to submissions will be sent out within two weeks. The languages of communication are English and French. If you are coming from outside the New York City area, please inform us of any urgent travel needs.

Or, send your submissions to Professor F. Sautman at FSautman@gc.cuny.edu