American Food in the 1918 Diet of Parisian Schoolchildren

American Food in the 1918 Diet of Parisian Schoolchildren

In 1918 the American Red Cross tried to improve the diet of schoolchildren in impoverished parts of Paris.  This project began after Dr. John B. Manning, who was working at a Rockefeller Commission dispensary in Paris, wrote in a January report that more food was what the children needed (Dock 808).  A correspondent writing from Paris in the June 22, 1918 issue of the Medical Record published in New York City noted that “The children have been forced since the war to take more and more meals outside the home because their mothers, obliged to become wage-earners for the family, cannot give their accustomed time and attention to the household.  The children naturally turned to the canteens of the school.  Upon investigation it was found that the menus in these canteens, although not greatly changed since the war, were considerably decreased in quantity, and the diet—wholly insufficient—no flour, little milk, and no sugar.  It is these foods, so necessary to the nourishment of the child, that the Red Cross is aiming to provide” (1098).  In the 14th arrondissement alone twenty-one hundred schoolchildren were each given on a Friday “a scientifically prepared sweetened roll made of wheat flour and rice and a bar of chocolate, replacing the 4 o’clock ‘goûter,’ discontinued since the war” (1098).  The 19th arrondissement was another district served. 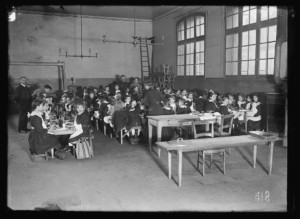 “Half a ton of condensed milk, 550 lbs. of sugar, 350 lbs. of beans, as well as flour, ham, tinned beef, and cheese is the American Red Cross contribution to the noon day meal of the under-nourished school children of the 19th arrondissement in Paris in the month of February.” 18 June 1918. Library of Congress, Prints & Photographs Division, American National Red Cross Collection. → https://www.loc.gov/pictures/item/2017680643/ 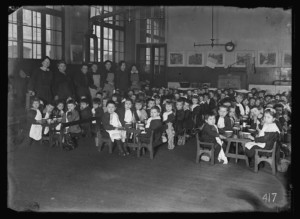 “American food goes to every school child in the 19th arrondissement in Paris. Doctors found that the chief trouble of the children of this slum district was that when their mothers worked in the factories they did not get the proper nourishing food in the school canteens.” 18 June 1918. Library of Congress, Prints & Photographs Division, American National Red Cross Collection. → https://www.loc.gov/pictures/item/2017680642/