Thomas from the Antilles

Thomas from the Antilles

France’s first anisette able to rival that of old houses from Amsterdam such as Lucas Bols (founded in 1575) and Wynand Fockink (founded in 1679) was the anisette produced by the 1755 company Marie Brizard et Roger.  The story of this anisette recipe’s origin has been given various forms over the years.

According to issue number 758 of the weekly magazine Le Panthéon de l’industrie : revue hebdomadaire internationale illustré des expositions et des concours from 1889, it was by luck that Marie Brizard (1714-1801) of Bordeaux came to know the recipe (315)—no information about its origin is given.

According to the 1892 book Drinks of the World by James Mew and John Ashton, Marie Brizard herself is said to have spent a lot of time concocting the anisette drink (165).  If readers did not question this too much, it may have been because her father was a bouilleur de cru (home distiller) and because starting from 1767 her company did sell new liquors that she had created such as Parfait Amour, Orange et Café.  Also, the idea of Marie Brizard working on different recipes may have been fine with readers in 1892 because during this time period the company did offer two styles of anisette: a rather dry one and a milder one.  The January 29, 1899 edition of the Parisian newspaper  Le Journal  mentions on page one that “En effet, pour satisfaire aux désirs de sa clientèle, la Maison Marie Brizard et Roger fait deux genres d’anisette : l’une, la douce, est réservée aux estomacs délicats des femmes et des enfants et se nomme l’anisette superfine ; l’autre, la sèche, l’extra Dry, est particulièrement l’anisette recherchée des hommes.”

The 1927 book Le nobiliaire des eaux-de-vie et liqueurs de France by Maurice Des Ombiaux mentions that Marie Brizard, who was a nurse before she became a businesswoman, was tending to the sick at a hospital for the poor, and one of the patients there gave her the anisette recipe in gratitude before he died (95).

According to the magazine The Wine Mine: A Mine of Wine Information from 1965 one of Marie Brizard’s patients was a West Indian man who had recovered from his deathly illness and gave her a recipe for a special liquor as a way to thank her (132).  A similar story about such a West Indian man is mentioned on page 287 of Bottling: A Quarterly Supplement to the Brewing Trade Review, Issues 167-170 (1966).

In April 1997 an article by Jean Watin-Augouard for Prodimarques, numéro 18, mentions that it was actually a sailor from the Antilles (“un marin antillais”) who gave the recipe to Marie Brizard because she took care of him during his illness.

The 2006 article “Les femmes d’affaires dans l’entreprise girondine Marie Brizard : mythes et réalités” by Hubert Bonin mentions three origin stories and is skeptical of them all.  The first is a 1966 piece of publicity in which the Antillean sailor is named: “ ‘Le 11 janvier, à 8 heures 30, une jeune Bordelaise, Marie Brizard, traverse rapidement la Place royale à Bordeaux.  Dans un coin, exsangue, Thomas, un Antillais, marin à bord de L’Intrépide, gît brulant de fièvre, inconscient.  Marie Brizard le recueillera, le sauvera.  En échange, Thomas lui transmettra son seul trésor : le secret d’une liqueur d’anis extraordinairement fraîche et parfumée…Ainsi naquit la Marie Brizard.’ ” (108).  Bonin goes on to say that this publicity just renews an older story about Marie Brizard saving a slave who was wandering on the seaport —she receives the secret recipe from him as a thank you (108).  A variation of this legend is that Marie Brizard’s patient was a planter or plantation owner from West Africa (108).  Bonin considers all three stories to be fabrications, stating that there are no documents to support these stories and that these stories are cheesy attempts at mixing exoticism, femininity, charm, and charity to sell a product (109-110).  The reader can argue, however, that no supporting documents have been found yet (or revealed) and that truths can be passed from generation to generation without any of it being written.  And wouldn’t the company be taking a risk (in favor of telling a truth perhaps) to credit an Antillean sailor or a slave with the origin of the anisette recipe?  More often than not a French food company would promote its products as having French origins.  And why specify the date, time of day, name of the sailor, and name of the ship?  To make the story more believable, a cynic might say, but it is just as possible that those details are part of an actual event.

In the 2008 book Histoire des Maires de Bordeaux by André Desforges the origin story becomes vague again: Marie Brizard received the recipe during the period when she was taking care of sailors from the Antilles (216).

The 2011 book Liköre by Franz Brandl says that it was a sailor who gave Marie Brizard the recipe (64).

The newspaper Sud-Ouest has an article from March 28, 2016 by Marjorie Michel entitled “Bordeaux : l’histoire mouvementée de l’entreprise Marie Brizard” which mentions that it was “un voyageur ‘venu des Isles’ ” who gave Marie Brizard the recipe.  This vague traveler is mentioned also in the article “Top des anecdotes insolites bordelaises” by Marie N. for the online magazine Le Bonbon on May 30, 2016.

And what is the official story as of 2017?  The website of the company, its name now being Marie Brizard Wine & Spirits, says that on January 11, 1755 Marie Brizard was crossing the Place Royale in Bordeaux where an Antillean sailor named Thomas, aboard the ship L’Intrépide, was burning up with fever—she then brought him to her home to tend to him, and as a thank you he gave her his only treasure: an anisette recipe (https://fr.mbws.com/notre-histoire).

The “Roger” in the company’s original name is from Jean-Baptiste Roger, the husband of Marie Brizard’s niece Anne: in 1755 a man’s signature would have been needed on business documents —Marie Brizard was not yet married at the time that she wanted to start a business (she would remain unmarried for the rest of her life).  The company, considered to be the oldest liquor enterprise in France, began exporting its anisette in 1763 and went on to produce a slew of other liquors.  In 2015 the company introduced cannabis flavored vodka.

A tiny ad for Marie Brizard’s anisette with the lines “George Washington took great delight in drinking Marie Brizard & Roger Anisette with General Lafayette at his home in Mt. Vernon.  For sale everywhere.  T.W. Stemmler, Union Square, New York” appeared in magazines such as the November 11, 1893 issue of Music and Drama: A Journal Devoted to Sport, Music and the Drama and the November 25, 1893 issue of The Illustrated American. 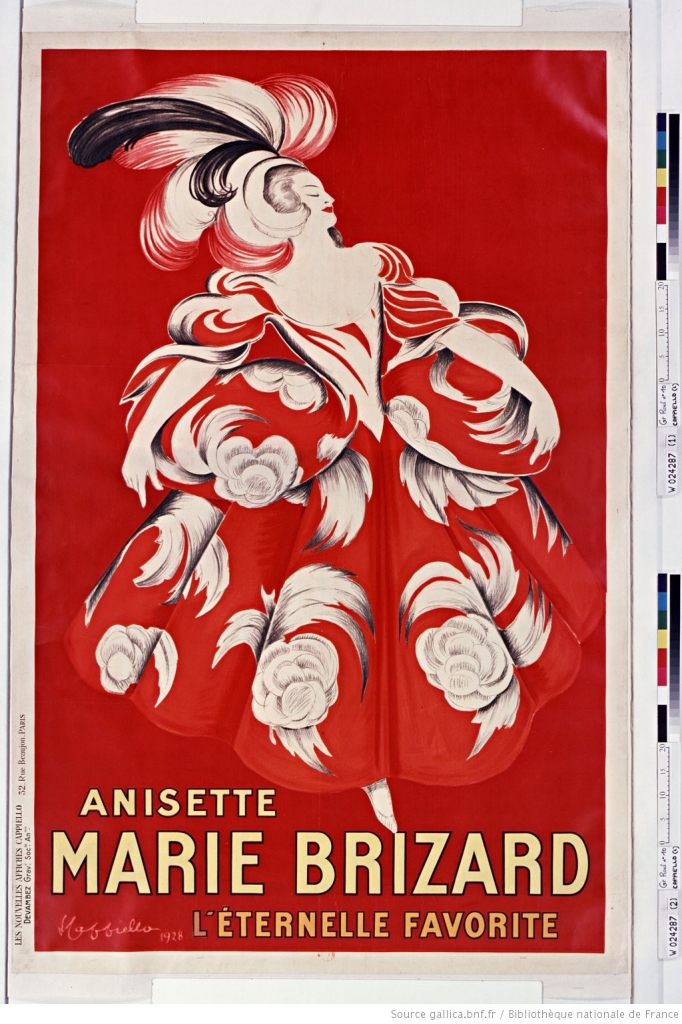 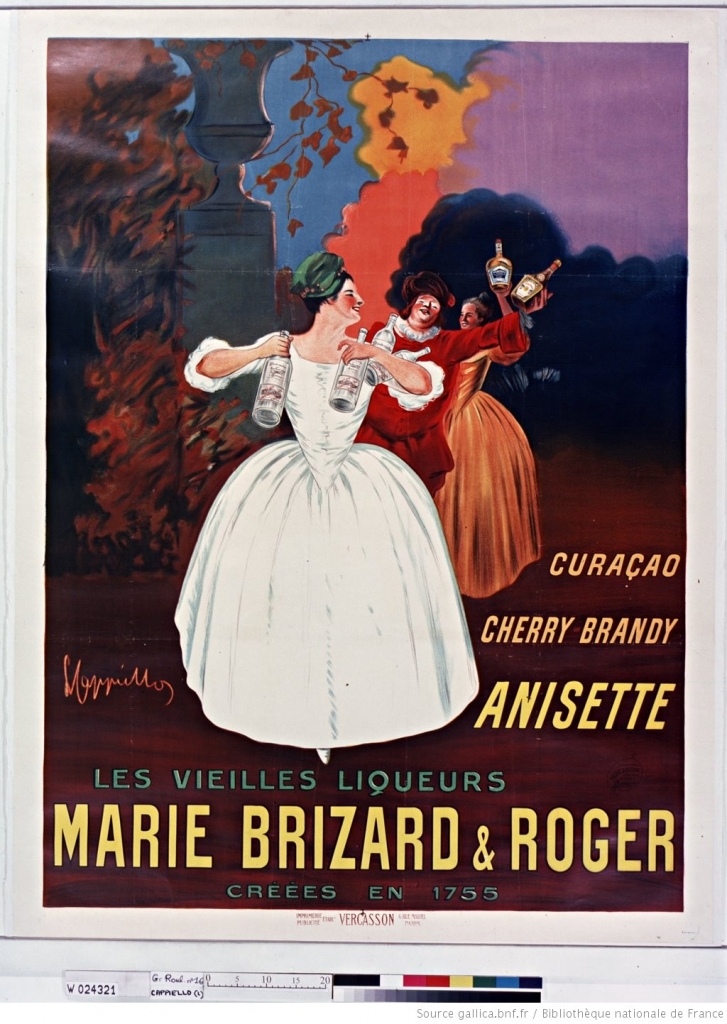