Lady Apples and the Big Apple

Lady Apples and the Big Apple

Is the borough of Queens in New York City really that much less interesting than Manhattan?  Not if you know that the Huguenots who had settled in colonial Flushing (present-day parts of Queens and Long Island) around the 1660s and around 1686 were the ones who introduced many types of fruit to the continent, such as the Lady Apple (“pomme d’api”), and that from this community grew the inspiration for America’s first commercial nursery.

Huguenots persecuted for their religious beliefs in France fled as early as the 1560s and 1570s.  The religious wars in France between Catholics and Protestants spanned almost half a century from 1562 (when the Saint Bartholomew’s Day massacre occurred) to 1598, when the Edict of Nantes signed by Henri IV (1553-1610) gave the Huguenots civil rights, freedom of worship in over a hundred cities and towns, among other liberties.  But little by little their rights were reduced by succeeding kings.  By 1622 the Huguenots had only two strongholds: La Rochelle and Montauban.  A 1669 edict made it illegal for Huguenots to emigrate to other countries, but many continued to do so at great risk.  Eventually, Louis XIV’s 1685 Edict of Fontainebleu (also known as the revocation of the Edict of Nantes) declared Protestantism to be illegal, and conversion to Catholicism was enforced.  Huguenots were not given back the freedom to worship until more than a hundred years later in 1787 under the Edict of Versailles (also known as the Edict of Tolerance/Toleration).  According to the Musée virtuel du Protestantisme, “from 1680 to 1715, 180,000 French left their country, the largest migration movement in modern French history.”  This exodus drained France of many of its economic and cultural elite.

What Louis XIV unwisely rejected, colonial America happily gained.  The Huguenots who found refuge in the colonial town of Flushing were expert fruit growers.  Around 1700 Robert Prince began growing trees and shrubs, and around 1730 he established an eight-acre nursery in Flushing.  Around twenty years later his son William would develop the family business on a much grander scale, and the third proprietor continued his father’s work of importing valuable varieties of fruits and flowers from Europe and Asia (such as roses from China)—much experimentation had been done with grafting, which resulted in fruits that could then be called American varieties.  The Prince family’s horticultural expertise further worked its way into the American fabric when “[m]any of the shrubs and flowers from the Lewis and Clark expeditions were sent to the Prince Nursery for propagation and distribution,” as the Smithsonian Library’s website notes.  The Prince Nurseries (under various names such as “The Old American Nursery” and “The Linnaean Botanic Garden and Nurseries”) remained the best in America until the mid-nineteenth century.  Their customers were the middle class and the wealthy, including Thomas Jefferson and George Washington.  Landowners in the southern US states were also customers.  Shipments went out to England and other parts of Europe.  Sources such as the New York Botanical Garden and the New York State Department of Agriculture have identified the Prince family as being Huguenots.  The Thomas Jefferson Foundation is less direct in saying that Robert Prince’s 1730 nursery operated “within a community chiefly of French Huguenot settlers” (Cornett 3). 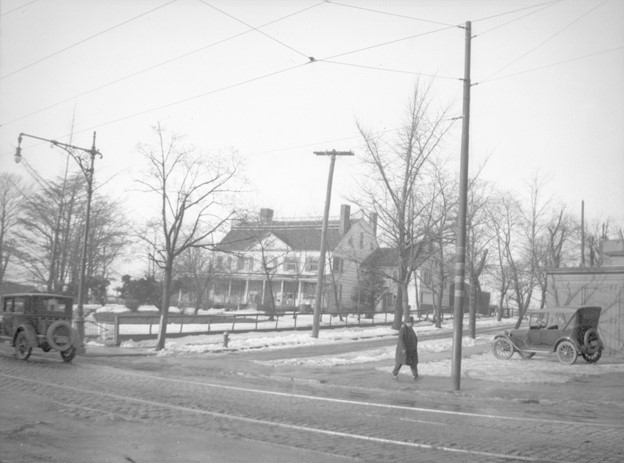 “Distant view of the W. R. Prince house. The house was built by the Embree family, and was bought by Prince in 1828. The structure was razed in 1943.” Public Domain. Eugene L. Armbruster (1865-1943). https://digitalarchives.queenslibrary.org/vital/access/manager/Repository/aql:7879?queryType=vitalDismax&query=robert+prince+

From the book The Apples of New York (1905) we learn that the Lady Apple had “long been recognized in the New York market as one of the most desirable apples for fancy trade at the holiday season” (Beach 182).  And England was purchasing loads of this apple from its former colony: according to the book Apples of Uncommon Character (2014), “[b]y the 1840s great shipments of Ladies were being sent from New York to London for the Christmas season, where it sold at a higher price than any other apple” (Jacobsen 247).  The Lady Apple was of Christmastime usage in France as well.  For example, the Revue des traditions populaires : recueil mensuel de mythologie, littérature orale, ethnographie traditionnelle et art populaire, Volume 23 (1908) notes that protestant families in Alsace would decorate oak boughs with ribbons, angel figurines, candy, and lady apples, among other objects (447).  As for Louis XIV, the Lady Apple was one of the seven types of apples that he liked to be served, whether or not it was Christmastime.  There were and still are Lady Apple trees in the gardens at Versailles of course.

The New York Metropolitan Museum of Art holds an 1874 painting by Henri Fantin-Latour (1836-1904) that shows just how small Lady Apples can be: Still Life with Pansies (“Pommes d’api et Pensées”). 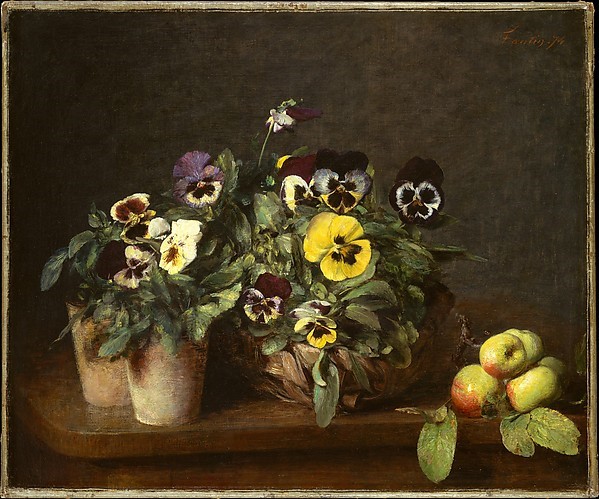 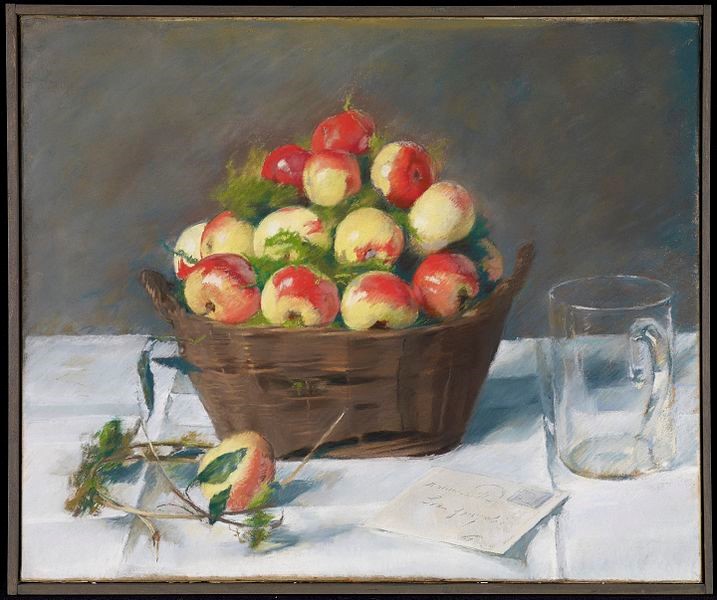 The Minneapolis Institute of Art. Public Domain in the US. https://collections.artsmia.org/art/103140/pommes-d-api-eva-gonzales

And around 1896 the American painter William J. McCloskey (1859-1941) finished his painting Lady Apples in Overturned Basket.  McCloskey and his painter wife Alberta Binford (1863-1911) traveled a lot, but it is possible that he may have been in New York City while working on this particular painting: “About this time they had a studio in Carnegie Hall— the McCloskeys’ daughter remembered hearing the music, and Alberta gives the Hall as her address when she exhibited in the February 1897 American Water Color Society show” (American Art Gallery website). 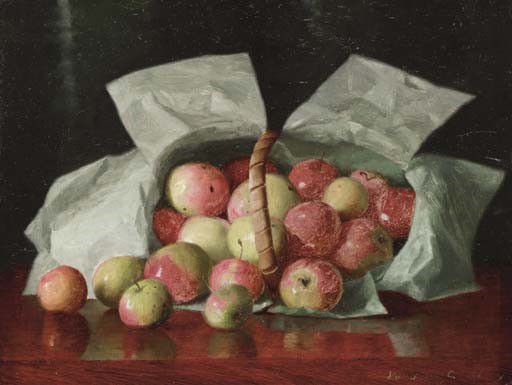 Public Domain in the US. https://commons.wikimedia.org/wiki/File%3AWilliam_J_McCloskey_Lady_Apples_in_Overturned_Basket.jpg

To wrap up my blog entry, here is an 1823 catalogue from the William Prince nursery: 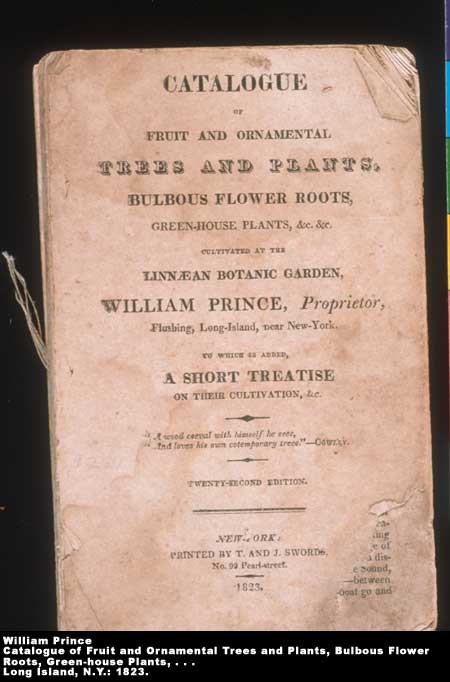