And He Also Fed the French

And He Also Fed the French

During the Franco-Prussian War (July 19, 1870 – May 10, 1871), a physician by the name of Christopher James Davis (1842-1870) from Saint Bartholomew’s Hospital in London went to Sedan, France because he wanted to provide aid to the wounded and the sick.  Arriving there in September 1870, he attended to both Prussian and French soldiers.  At one point he had three hundred patients (Pearson 357).  Mr. & Mrs. Richard & Mary Chrimes of England and other friends had given him funds to use as necessary to help the people in Sedan.  In addition to taking care of patients, he was in charge of an ambulance; and after many people in Sedan approached him for help regarding the scarcity of food during wartime, he created soup kitchens in the communes of Pont Maugis and Balan, which saved hundreds of families from starvation (Sattler 39).  Items such as meat, bread, meat broth, and milk were served (Lauxmann 175).  The sickly were given other restorative foods.  When he was told that a certain soup kitchen had run out of supplies, he gave his watch to be sold so that more food could be gotten for those who were still waiting for something to eat (Bleby 19).  The watch was a university-related prize that he had won while pursuing his MB at the University of Aberdeen in Scotland.  The soup kitchens were well enough set up that they continued to operate after he died from small pox on November 27, 1870—he had most likely caught the disease when visiting a military hospital in Sedan.  Of the people who worked alongside him in France, which included the protestant Monsieur le Pasteur Charles Goulden and his three sisters, Augustine Goulden (one of the sisters) wrote a letter dated December 12, 1870 which provides a sense of the esteem that she felt for Christopher James Davis (Bleby 24-31).  His funeral was attended by the many French and Prussians who were grateful for the help that he had given them.  Originally from Barbados, he was buried in Fond de Givonne, France. 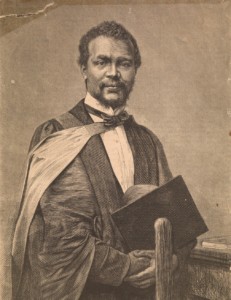 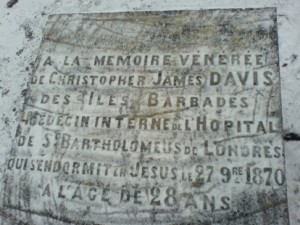 The Daily News Correspondence of the War Between Germany and France, 1870-1. Seventh Edition. London and New York: Macmillan and Co, 1873.

– – – . Grace and truth: being select gospel papers, etc. London: R.L. Allan,1871. {See his other works that are held in The Christian Brethren Collections at The University of Manchester Library → https://www.library.manchester.ac.uk/search-resources/special-collections/guide-to-special-collections/christian-brethren-collections/printed-material/catalogue/d/ }