Apple Marys and Apple Annies were women so nicknamed when they sold apples on the street as a way to eke out a living in New York City and other US cities during the late 19th and early 20th centuries —aspects about the lives of some of these women can be found in newspaper articles (an interesting compilation of sources to peruse would be Barry Popik’s webpage about these apple sellers).  Knowing this led me to wonder about peasant women who sold apples on the streets in France— in what ways has their work been noted?  In my search for material I came across various pieces of artwork with such women as their subject, and then, having found so far no source that gathers together much information about this topic, I decided to create a compilation of my own. Some of these images can be faulted for not being realistic enough with regards to the toll that poverty can have on peasant women who sell items on the streets— in a chapter called “Les Cris de Paris ou le peuple apprivoisé, XVIe-XIXe siècles” from the book Paris le peuple : XVIIIe-XXe siècle (1999) Vincent Milliot notes that for some artists “La femme du peuple peut devenir une sorte de mannequin, totalement idéalisé” (189).  Also, there are no names or any other exact kind of identification available for the peasant figures in the images that I have gathered here.  Nonetheless, taking a look at how these women have been portrayed in art across the centuries can help us to wonder in slightly new ways perhaps about these workers at the economic bottom of French society.  After all, apples have been and still are one of the most consumed fruits in France.

An engraving from 1640 is curious in that no apples are shown: Des pommes pour de la ferraille was made by Jacques Honervogt (1583-1666) who was originally from Cologne (Germany) but came to Paris in 1604 to work for the engraver Thomas de Leu (1560-1612).  Jacques Honervogt became naturalisé français in 1624.  In this particular engraving it is possible that the woman has traded all of her apples for the scrap metal that she could get, or her day of work may not be over yet if there are still some apples left in her basket. 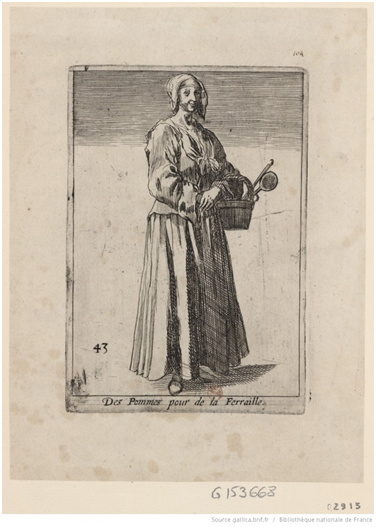 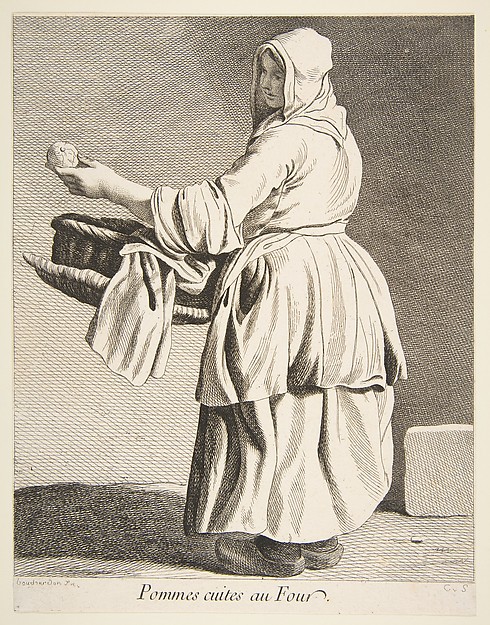 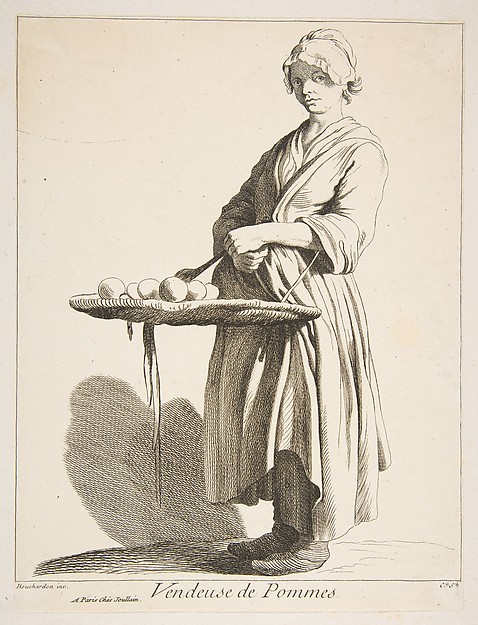 Some eighteenth-century artists chose to create more of a story when depicting peasant women selling apples, as in the case of an engraving called La marchande de pommes cuites (n.d.) by Jacques-Firmin Beauvarlet (1731-1797) after Jean-Baptiste Greuze (1725-1805).  The figures may seem a bit staged or sugary, but the modern day viewer should be aware that the artist’s goal could have been to create a work that would please potential buyers who were unwilling to have their sensibilities disturbed with a too realistic portrayal of impoverished women working. 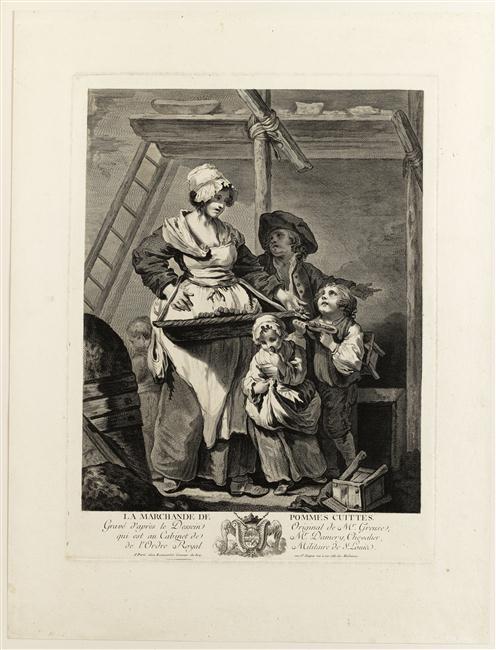 A less sugary depiction dating from the 18th/19th century would be a print called La marchande de pommes by the painter Michel-Martin Drolling (1786-1851) and lithographer François Bellay (1790-1840).  Even in the middle of winter if there are still apples to sell, a peasant woman cannot afford not to brave the weather to try to make a bit of money for the day. 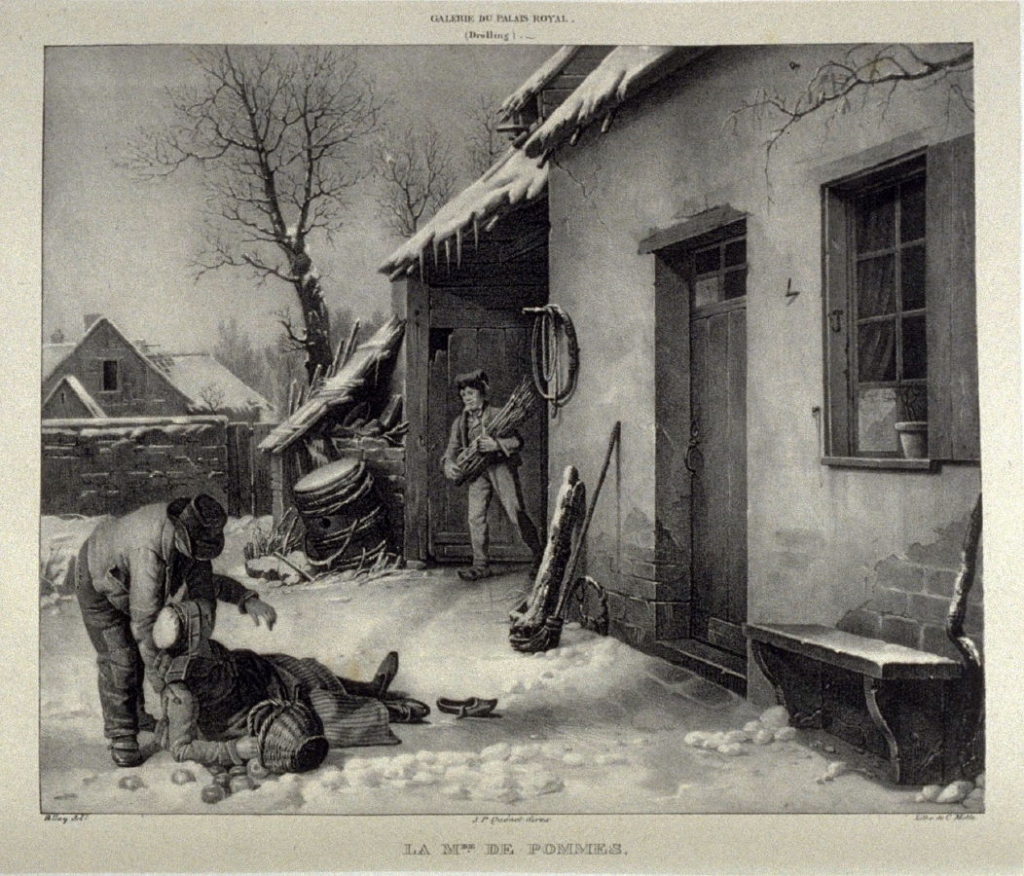 An 1878 painting by Léon-Augustin Lhermitte (1844-1925) called Marché aux pommes de Landerneau arguably provides a rather realistic depiction of peasant women selling apples.  He had visited Brittany and had made many sketches of the people there, which led to the creation of this particular painting and others, as noted on page 502 of the monthly periodical L’art, volume 64 (1905).  The working class and the poor appear repeatedly in works by Lhermitte. 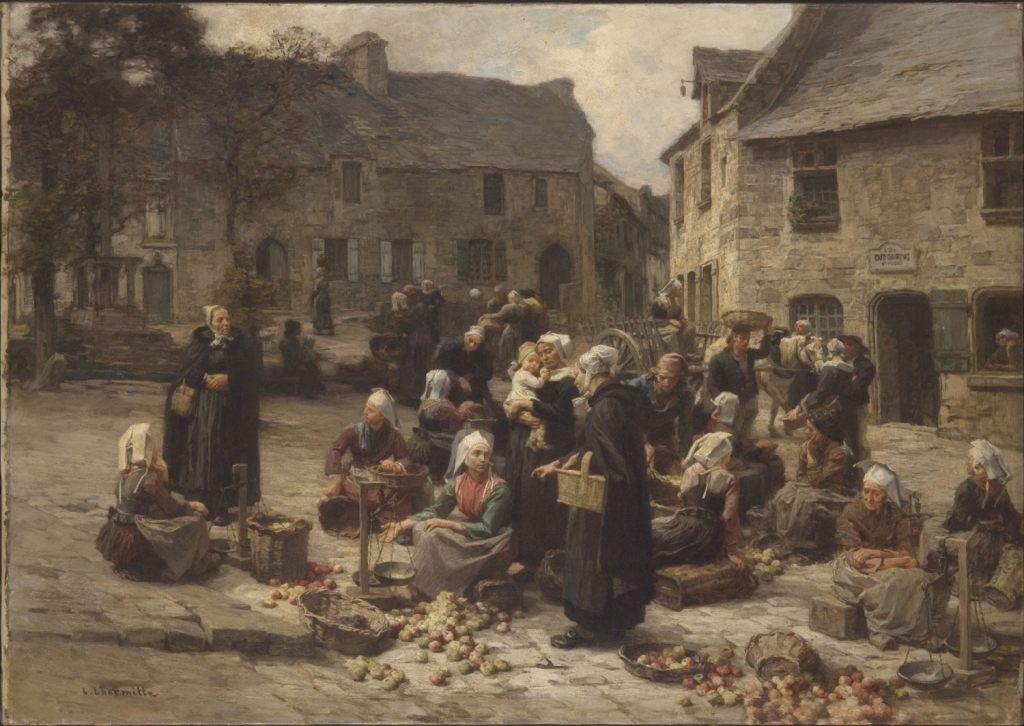 Le Pardon de Plourin (1877) is another of Lhermitte’s paintings in which there are apple sellers.  Here one might wonder about how quickly the women might have had to go position their wares in front of the church right after the service in order to maximize the number of potential customers.  And it is interesting that for a painting whose title refers to a penitential ceremony, the act of money changing hands is not only part of the center of the painting but also the part that is closest to the viewer. 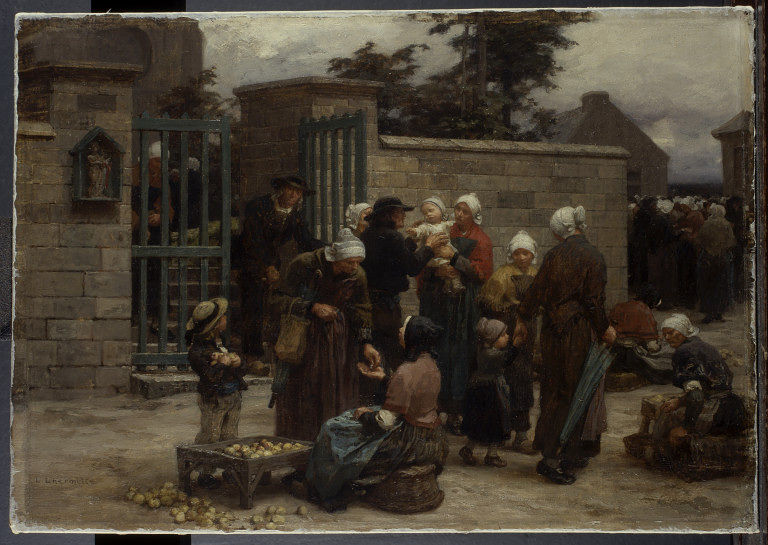 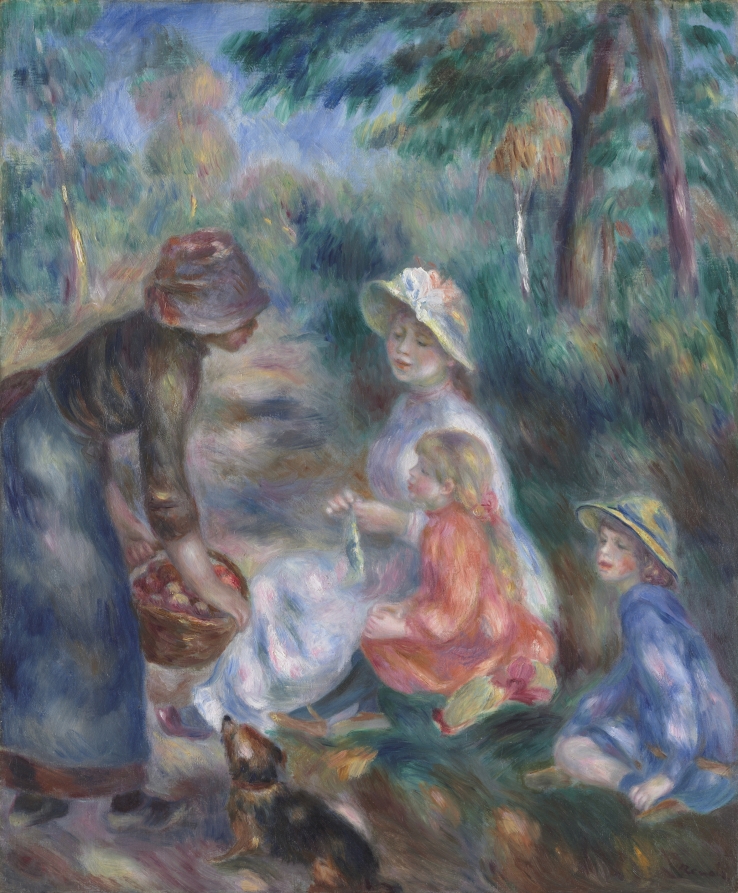 Renoir had painted three versions of the above La marchande de pommes.  The version that was sold in 2016 by the auction house Christie’s does not show a basket overflowing with apples and rather asks the viewer to imagine the apples that are in the peasant woman’s basket (https://www.christies.com/lotfinder/paintings/pierre-auguste-renoir-la-marchande-de-pommes-5992057-details.aspx).

Couple de nobles à la pomme, a painting that attempts to pass for being from the medieval period but dates from the late 19th/early 20th century, has been attributed to an artist dubbed The Spanish Forger (active c.1900).  It is possible that this artist was French and working in Paris.  Many forged medieval-looking miniatures using 14th and 15th-century parchment have been attributed to this artist.  The painting Couple de nobles à la pomme can be seen on the Expertissim website ( https://www.expertissim.com/the-spanish-forger-couple-nobles-pomme-tableau-12263312 ).  This painting is interesting in that in addition to the woman who is selling apples in the foreground, the artist reminds us of another stage of the peasant apple seller’s job: in the middle distance there is a woman atop a ladder harvesting apples.

A more concrete trace of women who tried to earn a bit of money by selling apples would be a photograph that appears on page 531 of Le Tour du monde : nouveau journal des voyages, publié sous la direction de M. Édouard Charton et illustré par nos plus célèbres artistes (1903).  The apple sellers are from a commune in Brittany.  The chapter “La Bretagne du centre, VI. Les montagnes d’Arrée” (p.529-540) by Gustave Geffroy (1855-1926) does not go into detail about the lives of these women. 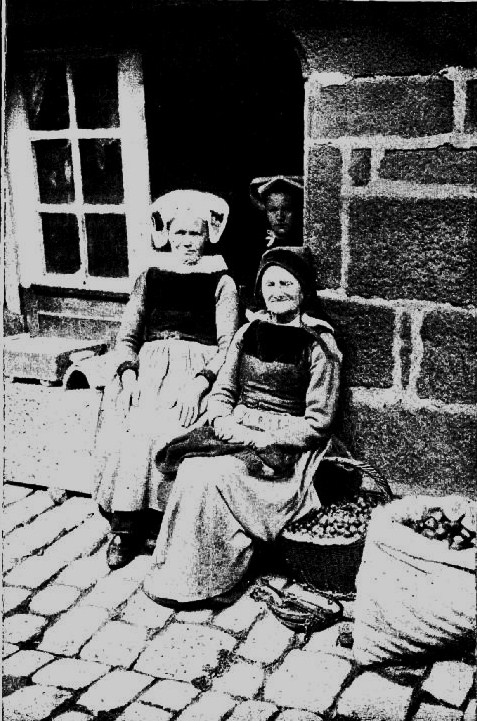 A photograph taken by John Warwick Brooke (1886-1929) during World War I in northern France shows a woman hoping to sell a few apples.  It does not seem as if she would be willing to give the apples away for free to the soldiers. 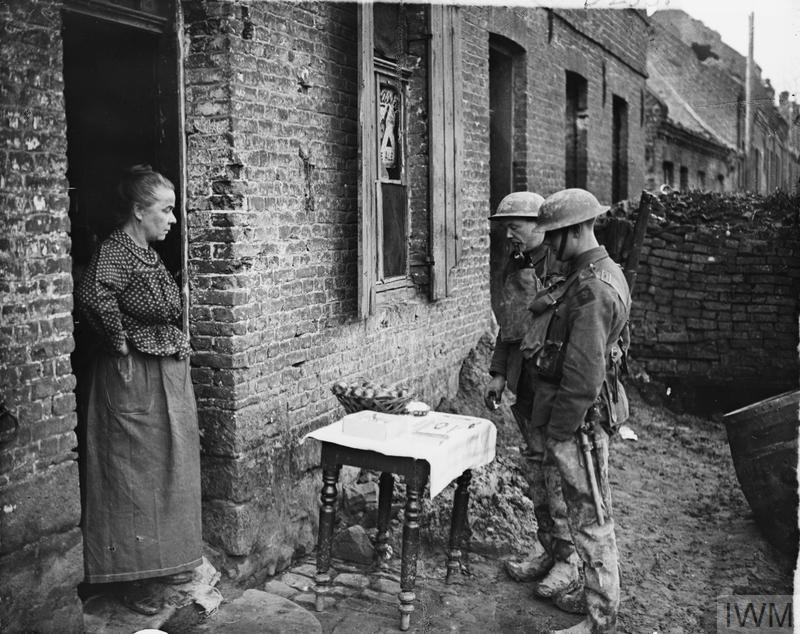